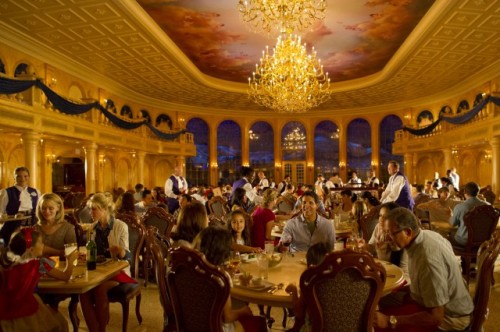 Disney’s Magic Band and the related MyMagic+ and Fastpass+ are just three elements of a skunk works type division charged with creating Next-Gen experiences for guests at Walt Disney World. Just how revolutionary are these changes? One Tampa Bay Tribune business columnist has gone so far as to claim they’re the future of retail and dining experience everywhere.

Disney’s Magic Band system of wireless wristbands, each one tied to a guest’s credit card account, and many guests never pull out their wallets to spend money. They just tap their wristbands on a sensor. Forget the guest feeling like it’s magical — that’s a retailer’s wish upon a star come true.

Richard Mullins visited the Magic Kingdom with his family and experienced the “Be Our Guest” restaurant for lunch. It’s one of the more unique experiences at Walt Disney World and also the first restaurant built from the ground up to be compatible with MyMagic+ (or as it was originally called on the blueprints – xPass).

There, you can either scan your Magic Band (more on that later) or just scroll through the menu. Everything has pictures, and it’s easier than shopping on Amazon. Swipe your credit card, and the Disney helpers hand you a “rose,” a puck-sized plastic doodad. “Just take it to your table,” they say, “and we’ll do the rest. Be our guest!”

Mullins and his family had a magical experience. So much so that he wondered why other families hadn’t figured out how amazing it was. Read the whole article to get all of Mullins’ business insight, but the gist is this: Disney has figured out a way to build a better people trap built by a mouse one more time.

Say what you will about Fastpass+, Next-Gen and all its technologies (including some big ones we still haven’t seen in full operation in the parks yet) is changing the name of the game when it comes to theme parks.