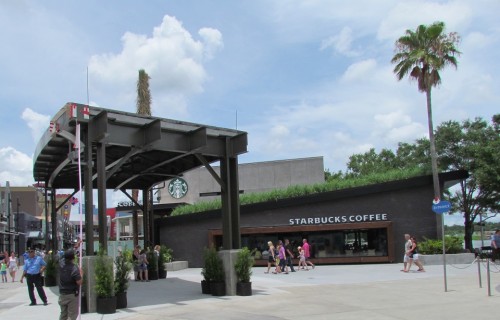 The Seattle based coffee house chain Starbucks has made it to Downtown Disney Orlando in a big way. In the last few weeks, it has opened two locations in the shopping and entertainment district to go with the two locations already inside Magic Kingdom and EPCOT. Fans of the dark brew will be able to get their cup of joe on the go nearly anytime they want.

In addition to the usual Starbucks location items, the Westside location includes a wide selection of food and baked goods plus their reserve coffees which are brewed in the new Clover system.

The store itself is nearly 4,000 square feet and features indoor and outdoor seating. The outdoor patio features a moss wall with the iconic Starbucks logo mermaid and a nice view of the water. Inside there is a magical portal that connects the Anaheim Downtown Disney location with the Orlando one with a chalkboard like interactive interface.

There’s more green in the store than just the moss wall. The location is also the 500th Starbucks store to have a LEED designation.

I’m also a little excited about the odd structure out there in the courtyard between the new Starbucks and the Harley Davidson location. It’s the first part of Disney Springs new vision for the Westside to be constructed. Eventually there will be a longer area of ‘highline’ to dance and dine on above Westside. It looks good so far, and the scale definitely seems right.

Heading out to Walt Disney World to pick up a cup of Starbucks? Be sure to refill your Starbucks Card online before you go. 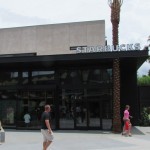 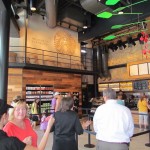 The inside is definitely warmer, but the tall ceilings create quite an echo 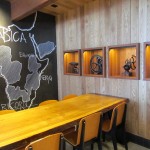 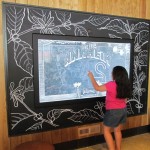 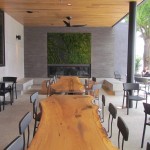 The outside porch and moss wall with mermaid logo

Are you looking forward to your first visit to Disney World’s newest Starbucks location?