The flavors of Seattle have finally arrived at Walt Disney World’s most popular shopping marketplace. Starbucks has opened the first, and smaller, of two locations at Downtown Disney. This location is located on the marketplace side attached to the World of Disney store and near the LEGO store. It is a simple walk-up window with plenty of registers, to prepare it for what is anticipated to be a large capacity. 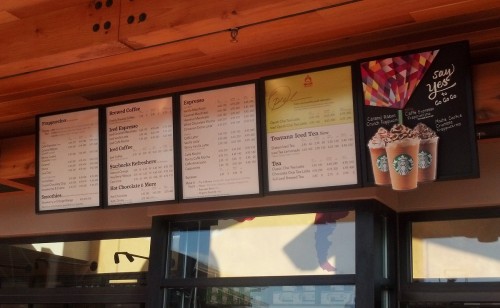 After waiting in queue, you order at the registers then move to a side window to pick up your drinks and baked goods. There are no tables nearby, but there are a few a short walk away (toward Rainforest Cafe) and benches at the nearby stage. It appears to be a full-service location with all the expected drinks, but the baked good selection did look a bit shrunk down. I liked the mural on the back wall highlighting the regions of the earth best suited for growing coffee beans.

As with the other Starbucks locations on property, prices are slightly inflated, but not too bad really. A larger location is under construction over on the Westside of Downtown Disney and locations have also recently opened in EPCOT and the Magic Kingdom. No official location has been announced for Disney’s Animal Kingdom or Disney’s Hollywood Studios, but was announced that those parks would also be getting Starbucks.