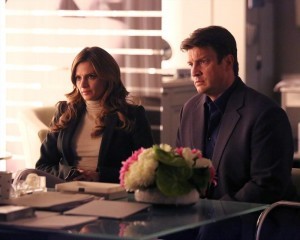 I must admit I am still a bit shocked at last week’s episode of Castle. I think they just wrapped up Joanna Beckett’s murder, and the show isn’t over yet. True, they could still have Senator Bracken go after them from prison, but I hope they do try to revisit the story. Give them something new to worry about to keep bringing back a few of the other recurring bad guys.

Besides, this gives Beckett a fresh start as she and Castle tie the knot on Monday’s season finale.

From an interview I saw with star Nathan Fillion, this is a lighter than normal season finale. Heck, it sounds like the mystery the pair are investigating hits close to home without even being a murder. And if they don’t solve it, they might not get married. We’re talking more wild romp than traditional investigation here. Not only have they earned it after last week, but it will be a great change of pace as we close out the season.

Still, I am expecting a cliffhanger of some kind, which makes me very thankful to know the show will be back for season seven (can you believe it has been seven years already?) in the fall.

My recap will go up next week, probably on Wednesday due to being out of town. See you at Carstairs Considers then.