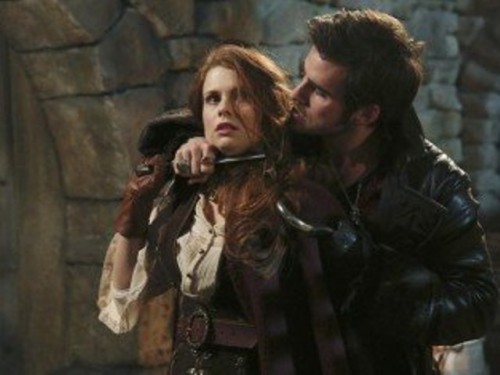 So I’ll give you two guess who is the central character on this Sunday’s Once Upon a Time, and the first one doesn’t count. With a name like “The Jolly Roger,” could it be anyone other than Hook?

It also brings back Ariel, which was a pleasant surprise since I love the actress and the character. In Enchanted Forest of the last year, she will be searching for Prince Eric, and she’s certain that Hook is holding him prisoner. There’s just one problem, his own ship has been stolen. Eric might be a prisoner on that ship, but who took it?

Meanwhile, in Storybrooke, Ariel is going to show up asking for Hook’s help in locating Eric. (Sensing a theme here?) He is among those missing with the new curse. Could we be about to learn more about the flying monkeys? Are there more than two (Walsh and Little John)? Is that where the “missing” towns people are going?

In other developments, Mary Margaret and David are going to be on Henry sitting duty, and they’ll be trying to prove they are just as much fun as the distracted Hook. And Emma is going to pick up her magic lessons with Regina. That should be very interesting.

I’m looking forward to watching this all unfold Sunday at the usual time. And I’ll have my recap up at Carstairs Considers that night as well.