Once Upon a Time 3-16 Preview: It’s Not Easy Being Green 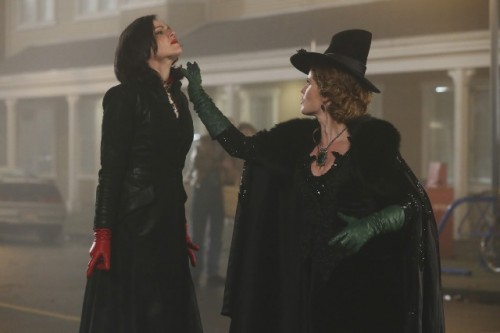 I don’t know about you, but I’m still reeling from the ending of last week’s Once Upon a Time. Part of me gets why they did it. And part of me is still upset. I have a feeling the ramifications of that will extend well into the rest of the season. At least I hope they will or they will have ruined the entire reason they did it.

And yes, I’m being vague in case there is someone out there who has yet to see last Sunday’s episode. I don’t want to be the reason someone gets spoiled.

But looking a head to this week, I don’t think it’s at all surprising to learn that Zelena, aka the Wicked Witch of the West, will be the focus of the episode. Come on, given that title, what else could it be?

And we’ll get our first glimpse of Oz because the flashback will focus on the time when Zelena learned that she had a half-sister and that Rumplestiltskin was training said sister. She will be going to the Wizard to try to get to Enchanted Forest to meet/interfere.

And in Storybrooke, she is going to challenge Regina to a dual. Plus she’ll also spill the beans about their relationship, giving Regina a chance to be surprised all over again.

The episode airs Sunday at the usual time, and I’ll most likely have my recap up at Carstairs Considers that night as well.