Once Upon a Time 3-15 Preview: Quiet Minds 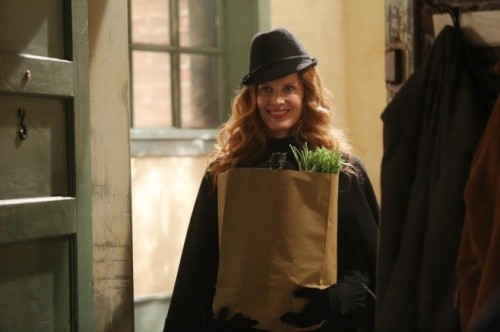 One of the mysteries we’ve been facing so far this half of the season is where is Neal. Heck, he hasn’t even appeared in the flashbacks that much. Coupled with that, how is Rumplestiltskin still alive? I have a feeling we’ll be getting answers to both of those questions this week.

Well, I know we will with Neal. He’s going to appear in Storybrooke and be trying to reconnect with his son. Of course, Henry still has no clue who any of these people are, including his own father. Then word is going to reach Neal that Mr. Gold is alive and wandering around the area somewhere, which will set him off searching through the woods.

Meanwhile, the flashback will also be Neal centered and he and Belle will team up to try to bring Rumplestiltskin back to life. So the question I’m hoping to see answered is how did he come back to life. Did Neal and Belle have something to do with it? Or was it all Zelena’s doing?

Oh yeah, and we’re getting a new friend in the mix. Teaming up with flashback Neal and Belle will be Lumiere. This should be lots of fun.

Meanwhile, back in present day Storybrooke, Zelena is going to continue getting closer to a clueless Mary Margaret. I do wonder why she is so interested in the baby.

The episode airs as always on Sunday night, and my recap will be up Sunday night or Monday morning at Carstairs Considers.

previousDispatch from Disneyland – Save 50% Through End of March
nextMeet the Characters from Disney’s Upcoming Star Wars: Rebels Animated Series