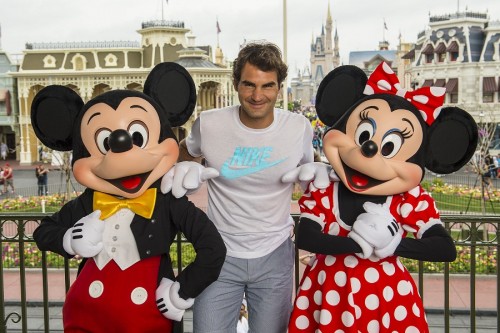 It’s been a busy week for famous people visiting Walt Disney World. In addition to the Tina Fey and Katie Holmes photos posted earlier this week, I’ve heard about a half dozen other celebrities in the parks with their families. One of them was tennis legend Roger Federer. In this photo from March 17, 2014, Federer poses with Mickey and Minnie Mouse at the Magic Kingdom. The Swiss-born Federer holds the men’s world record for most Grand Slam tournaments won with 17, and has spent 302 weeks as the world’s number-one ranked male tennis player. Federer is in Florida as one of the top seeds competing in the Sony Open in suburban Miami this week.

previousMerchandise Find of the Week – The Orange Bird
nextCastle 6-19 Preview: The Greater Good