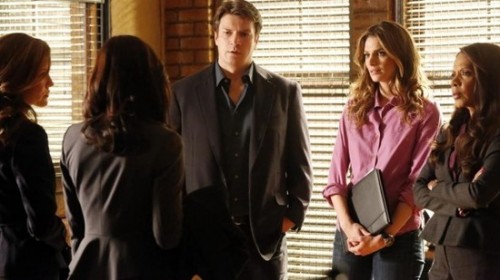 It seems most of the people I’ve talked to did enjoy Castle’s fight with Ninjas last week. While I thought it might be funnier, I got a kick out of it. I guess we’ll see how people react this week.

It’s time for Captain Gates to get some character development this week. The murder victim is a Wall Street trader. So far nothing out of the ordinary, right? Well, here’s the twist – the victim was an undercover informant for the US Attorney’s office. Naturally, they are going to get involved, and their liaison is going to be Gates’s estranged sister.

Honestly, they haven’t done much with the character this season. Heck, she’s hardly been around. I’m looking forward to this episode for that reason.

Last week, there was no progress on the wedding, but it seems like they need to be stepping that up big time if the wedding is really going to happen in May. We’re running out of time and episodes between now and the season finale. Just theorizing here – we’ll see if the producers agree with me on this front.

The episode will air Monday night, and I’ll be recapping over at Carstairs Considers on Tuesday.

And a quick plug for next week. It’s a rerun of the January episode involving an arsonists and murderer. It was one of my favorites this season, very well done. If you missed it, be sure to tune in on March 31st to catch it.