Once Upon a Time in Wonderland 1-10 Preview: Dirty Little Secrets 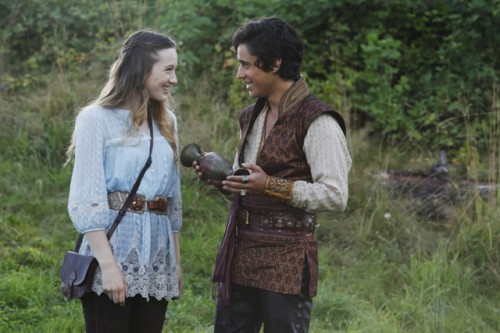 Every fiber in my body is screaming at me that the Red Queen cannot be trusted. It would be just like this show (or TV in general) for the Red Queen to really be working with Jafar still and be planning to betray our heroes. Yet Cyrus trusts her, and her actions seem consistent. So I’m rooting for her to wind up with a happy ending after all.

Which brings us to Thursday new episode of Once Upon a Time in Wonderland. We will have the foursome of Cyrus, Alice, Red Queen, and Knave splitting up into pairs. Why? Most likely because they think it will give them a better chance again Jafar since there’s only one of him. Little do they know that he’s teamed up with the Jabberwocky.

Meanwhile, we are also going to get a flashback to what caused Cyrus and his brothers to become genies. After last week’s reveal at the end that Cyrus did not become a genie by choice, I’m very interested in seeing why he did. Plus I think it will hold a clue to the climax of the series.

I’ll see you Friday over at Carstairs Considers to discuss the events and their implications.