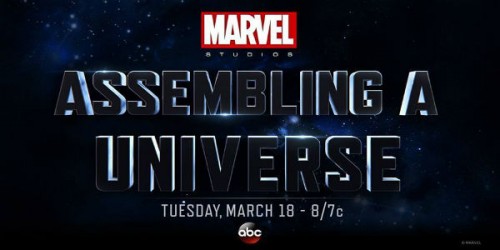 Marvel released a clip from the special, “Assembling A Universe” yesterday.

On the one hand, I am really looking forward to taking a step back and seeing the bigger picture of the MCU through interviews and behind the scenes footage going all the way back to Iron Man and The Incredible Hulk and getting to look to the near future with Agents of S.H.I.E.L.D., Captain America: Winter Soldier, Guardians of the Galaxy and even Avengers: Age of Ultron.

On the other hand, this special is coming at the cost of yet another break for AoS as it will be taking the 8pm time slot next week. Once Upon A Time (and, before that, Lost) has made similar specials but aired them before the episode, not in place of, and I wish they would do something similar with AoS. But, I’ll get off that soapbox before I leave the reason for this post, which is the video clip. Enjoy!

Other than putting Marvel in Walt Disney World, what should Disney be doing with the Marvel Universe that it’s not already?