TV Preview: Once Upon a Time 3-12 – New York City Serenade 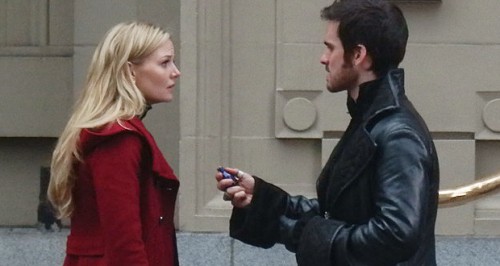 It has been a very long break waiting to see just what the next chapter is for our characters on Once Upon a Time. I am so excited for the new episode coming up on Sunday!

Why is that? Think about where we left the characters. The last we saw of Storybrooke, Regina was waging a war with the new curse that was going to send everyone back to Enchanted Forest. Gold/Rumplestintskin had killed himself in order to defeat his father – Peter Pan. And Emma and Henry were driving away to a life together in New York City.

Then we skipped ahead a year and Hooked showed up saying that Emma’s family needed her. Of course, since their memories had been wiped, Emma and Henry had no clue who he was or what he was talking about.

So where do we go from there? To be honest, I’ve been avoiding spoilers and the official teasers I’ve seen don’t reveal much only do a recap like I’ve just done. We do know that Rebecca Mader is joining the show as the Wicked Witch of the West and from the previews they are showing, it appears she has a connection to Regina.

Those previews also seem to indicate something weird happening in Storybrooke. Now I thought Storybrooke was destroyed. Either the previews are false or there’s something I missed/wasn’t explained well in the fall finale.

Either way, we’ve got two hours coming up on Sunday. The first hour is a recap of the first half of season 3 – the Neverland chapter. And then we get a full all new hour. I can already tell you it will be too short.

As always, I’ll have a recap over at Carstairs Considers.