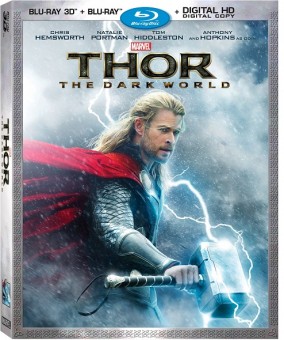 With Thor: The Dark World now available for purchase, I was able to sit down and enjoy the special features on the Blu-ray DVD last night. The behind the scenes feature was very good, though it focused mainly on how Thor, Loki and their relationship has progressed over the three movies and wasn’t really a “making-of” feature.

There’s a featurette focusing on the score of the movie that was interesting. There were interview clips from the composer as he talks about the choices he made in creating the musical theme for the movie.

The gag reel and the deleted/extended scenes are underwhelming to me. I always compare the gag reels to the one on The Avengers (which I enjoy greatly) and this one comes up short. And the only deleted scene worth watching is the one they already released.

The Marvel One-Shot this time is called All Hail The King staring Ben Kingsley as Trevor Slattery. He’s become quite the celebrity in prison and there is even a documentary being filmed about him. We come in for the last interview by the guy making the film. For a short film, there is a pretty good twist at the end and a completely unexpected cameo.

There is also audio commentary that I haven’t been able to watch yet.

Overall, the special features on the Thor: The Dark World Blu-Ray were good, but I would like to have seen more “making of” features.

Will you be adding this DVD to your collection?

3 thoughts on “Thor: The Dark World DVD/Blu-Ray – A Look at the Special Features”

previousInstapic: Disney’s Hollywood Studios is my favorite for architecture. How about you?
nextFood Verdict: Love it or Hate it – Chicken Waffle Sandwich at Sleepy Hollow