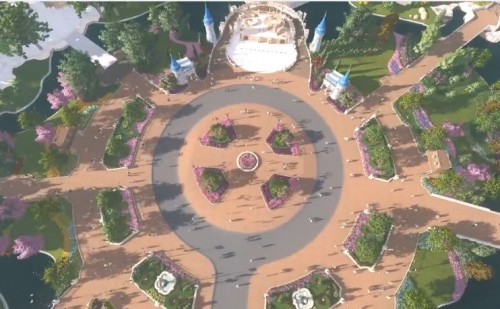 Disney has just released a concept video showing a short fly-over of a completely re-designed central plaza in the Magic Kingdom. I’d heard the rumors this was coming, but had not heard exactly how extensive the change would be. It’s dramatic. The end result will change the character of the main hub of the park, transitioning from moat to garden, an idea first conceived for Shanghai Disneyland. But Orlando is getting a version of it first.

Watch the video then join us below as we dissect a few key visuals:

The newly remodeled hub will feature several new elements, including fountains, sculpted gardens, additional pathways, expanded restaurant seating and even a special viewing area for fireworks and other performances.

Looking down toward Main Street U.S.A. you can see the popcorn and soda locations have been converted to fountains. The main parade route path is still there, but there are additional routes to the sides and the moat appears to be gone between the hub and Main Street. 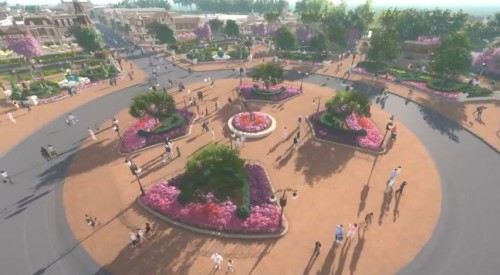 Here we see some of the changes coming to the castle forecourt area. The show control buildings that current have a Main Street feel will soon be changed to look like an extension of Cinderella Castle. That effect worked pretty well creating a wall between New Fantasyland and ‘classic’ Fantasyland. I’m hoping it also means they could be preparing for some additional entertainment features added to the moat and forecourt area. Disneyland Paris has an amazing show that uses water fountains, digital projection and more. 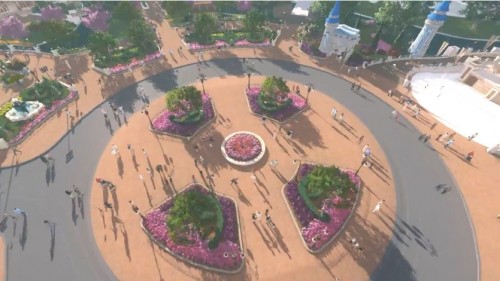 Finally, we get this overhead shot of all the changes. Starting down by Main Street you can see the expanded dining for Casey’s Corner. There are also new walking gardens where the moat used to run. It’s not clear if this is just a wider bridge or if they will fill in dirt below. Moving toward Tomorrowland, the old Swan Boat Dock is removed, probably to make way for a new filming area. You can also see the relocated popcorn and soda vending location just passed the bridge to Tomorrowland. On the other side of the hub is another vending location and you’ll also notice the second concentric circle of pathways. The path with bridges from Liberty Square to Plaza Gardens remains. Not in this video is addition of a pedestrian friendly themed alley way behind Main Street. The same path they currently open backstage to ease crowds off of Main Street and back out to the exits and on the way to their resort of the TTC, will get a makeover so guests will no longer see employees cars, garbage dumps, and a bus stop. Work for that has been progressing simultaneously with the expansion of Casey’s Corner’s seating area.

My guess is that the primary reason for all these changes was to ease crowd patterns, distribute them better throughout the parks, and increase park capacity. If that sounds familiar, it’s because that’s been the main effect of Fastpass+ too. It is always cheaper to pack more people into an existing park’s footprint, than to expand that footprint or even build a whole new gate.

As I said at the beginning, this will transform the hub dramatically. Not only will crowds flow easier through the area, even during fireworks and parades, but the rest of the time, the hub will become a place to slow down a bit, stop and enjoy the garden atmosphere. What I don’t see in this video are benches, but hopefully those will be part of the new plan as well.

What do you think of the changes?