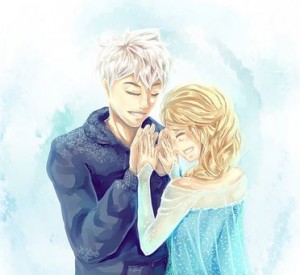 Disney has a sort of love/hate relationship with their fans. They know that word of mouth has helped Frozen conquer the box office (an incredible $915 million worldwide so far) and that the best way to support their fans is to let them do fan things, like cover videos and fan fiction (any Jack and Elsa shippers in the house?) without interference. But they also see all that as potential lost revenue.

A recent article on Variety looks at how Disney has taken a hands-off approach with Frozen fan videos on YouTube (and related material on Tumblr). The article makes it sound like it’s a recent phenomenon. But the truth is Disney learned an early lesson about this from Star Trek.

The early inventors of the internet were mostly science nerds (shocking, I know). They loved nerd stuff, in fact, the first email list was a sci-fi list to talk about Star Trek. This love only spread as the internet took off with bulletin boards full of fan creations and a number of Star Trek fan websites popping right from the start. When the Paramount movie studio wanted to relaunch the Star Trek brand with new movies, they filed against all those fan sites to get content taken down and possession of the domain names. The fan backlash was so angry and large that Paramount had to retreat. Since then they’ve had an appreciation of Star Trek fans, even to the point of letting some fans make their own TV show.

Michael Eisner came to Disney from Paramount. He saw what was going on at his old digs and knew that Disney fans were at the core of the brand’s economic base of support. Eisner didn’t want to make the same mistake his old friends at Paramount did, so Disney implemented a rule that they mostly stick to. As long as you’re not claiming to be Disney, sell Disney as your own product, or use the characters in an unlicensed way to make money, Disney gives you a long leash to do what you want.

Of course, as the over 1.2 million fan videos of Frozen songs shows, that leash is getting very long with the easy of new digital technologies. But the correct way to look at that is 1.2 million fans all promoting your product, all wanting to run out to Target to buy that Frozen merchandise the moment it is loaded off the truck (trust me, I’ve seen the frenzy).

Let us know if you’re a Frozen fan in the comments. What do you call the community?