“Disenchanted!” is an Princess-larious good time! 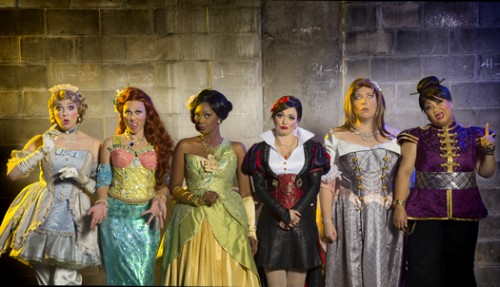 “Disenchanted!” is a cabaret-style original musical, originally created in Orlando by two former Disney World employees, that takes a look at those classic princess stories we have come to know and love…through the eyes of the ticked off princesses.

The show has had various productions performed across the country, and they are planning to head off Broadway in the very near future, but I had the wonderful opportunity to check the show out at the Straz Center in Tampa Bay a few weeks ago with some of the original cast, and this show blew me away!

I had some familiarity with the show as I had seen some YouTube clips of Lulu Picart (some of you might recognize that name as she was one of the fantastic co-hosts of “Orlando Attractions Magazine: The Show” a few years back) singing “Mulan’s Song” from the show. It is a fantastically sung and hilarious number about Mulan figuring out that, since she didn’t get the guy in the end of the film, she might just be a lesbian. Lulu’s acting and belting throughout the song have made me constantly replay it over the last couple years since I discovered it, so when I heard this show was coming to my area, I jumped at the chance to check it out.

It was situated in the Jaeb theater, the 3-story, intimate theater at the Straz Center and for good reason. The smaller room makes the show shine brighter, as some of the joy of it would be lost in a huge 5-story theater.

Other than the Mulan number, I didn’t know much about the show, yet it blew me away on how funny it was, yet still having some really strong musical numbers. Michelle Knight shines as an anger-filled Snow White and Breanne Pickering is a riot portraying the ditzy Cinderella, but Lulu is incredible playing Mulan, Pocahontas and Jasmine throughout different points during the show. Her deadpan humor and huge voice helps bring the show to a new level.

As you probably guessed from the subject matter of Mulan’s song, this so is NOT a Disney production. The princesses sing about how men draw them to be more sexual, how they are starving themselves and their overall dissatisfaction with their portrayals…and that dissatisfaction is shown through NSFW musical numbers. Yet, the show still showcases heart all while be an uproarious good time.

If you want a great night at the theater, I highly recommend you check out “Disenchanted!” at the Straz Center in the heart of Tampa, playing now through April 13th. Let me know your thoughts below and until next time…have a Magical Day!

(photo courtesy of the Straz Center)