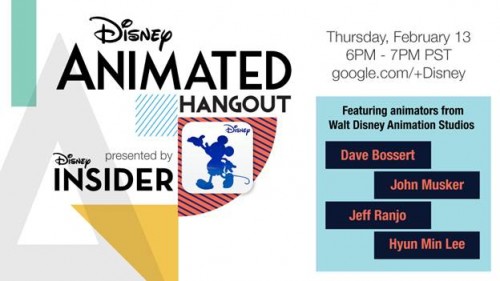 Get ready for a special Google Hangout for animation lovers, aspiring artists, and Disney fans. Disney Interactive is showcasing the art of Disney animation and their new iOS App Disney Animated. The good news is that you can participate in the event right from your computer via the magic of Google Hangouts.

Celebrated Disney animators Dave Bossert, John Musker, Jeff Ranjo, and Hyun Min Lee will all be taking part in a live discussion about the art form, legacy, and future of animation at the CalArts campus and Disney Insider will be broadcasting in online for fans to watch. They’ll also demo and discuss the new iOS Disney Animated app, which presents a deep dive into the making of Disney’s 53 animated feature films and was named the Apple iPad App of the Year for 2013. Additionally, viewers who live tweet questions and comments to the panel via social media using #DisneyAnimated have the chance to win special prizes, including a free download code for Disney Animated, an exclusive Disney Animated iPad case, and more.

If you ask me, this is exactly what Disney needs to be doing more of. Alas, I have prior commitments. But usually hangouts are available for watching afterward, so there is that. Will you join the hangout?