Marvel’s Agents of S.H.I.E.L.D. has recruited actors Bill Paxton and Jamie Alexander for upcoming episodes of the series. 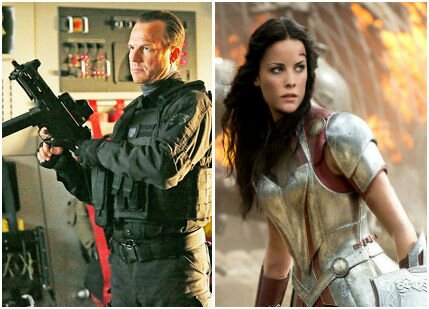 Paxton will play Agent John Garrett, a former cohort of Agent Coulson (Clark Gregg), who will team with Agents Ward (Brett Dalton) and May (Ming-Na Wen). The character of Garrett will be more rough-and-tumble with a bit of attitude.

Executive producer Maurissa Tancharoen told TV Guide that the character will join the show in a “surprising way” in a character arc that will start in late-February or early-March.

Jamie Alexander will also be making an appearance in an upcoming episode, reprising her role of Lady Sif, from the Thor films.

The date and storyline for Sif’s appearance on Earth have not been revealed by Marvel, but I wouldn’t be surprised if it’s timed to coincide with the release of Marvel’s “Thor: The Dark World” on 3D Combo Pack, Blu-ray and DVD, on February 25.