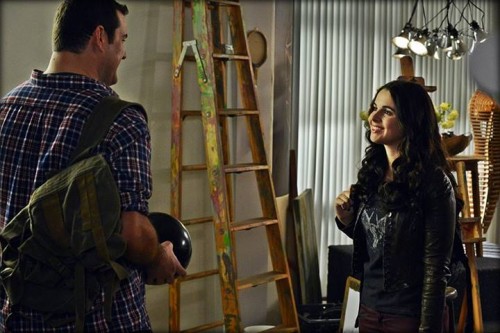 The very popular Switched at Birth has returned to ABC Family for a new season. Disney’s new policy of hiding its cable shows behind a paywall unless you are on certain cable providers makes it difficult to see, so who knows if the popularity will continue. It’s a great show, though. Here’s a quick recap of the first episode of the new season

The show opened with the Kennish family preparing for Bay and Daphne’s first day of Senior Year, #photop. Daphne begins her court ordered community service; Kathryn while running an errand stumbles into a dance studio and joins in on a class. Bay goes to Melody (Marlee Matlin) to discuss her disappointment in the art class offered at Carlton who then suggests she enroll in an art class at the local college. Toby is trying to find ways to occupy his time while awaiting the return of his new bride, where as Angelo is completely stressed out over plans for the restaurant and it looks like Regina may become her own boss after all.

The shows creator Lizzy Weiss along with several of the cast were live tweeting during the East Coast feed of the season premiere and have said they will be back to do it again next week so be sure to log into twitter next Monday and use the hashtag #SwitchedatBirthChat to make comments or ask questions.

Are you a fan of ABC Family’s Switched at Birth. What makes you watch week after week?