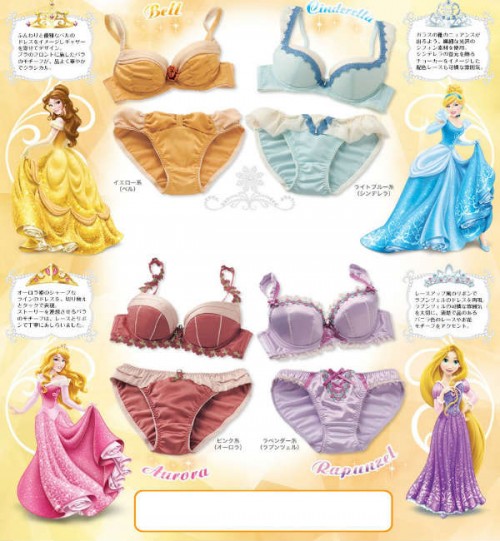 It appears Disney fandom and cosplay has reached a new level. You can now purchase Princess-inspired lingerie in Japan.

A company called Bellemaison has four different sets for sale, inspired by Aurora, Cinderella, Rapunzel, and Belle. I thought at first it might be unlicensed, but a disclaimer at the bottom of the online catalog states, “Disney Fantasy shop is subject to the agreement with Walt Disney Japan.” (Ok, so I had Google translate it for me.)

Each bra and panties set retails for 3,990 yen, which is approximately $38 USD, at the Bellemaison boutique in Japan, or online (if you know Japanese clothing sizes and the language).

Call me crazy, but I think undergarments like this would probably sell really well at the U.S. parks, though I’m sure some would call it inappropriate. Most people may not know this, but Disneyland opened with a store on Main Street USA that sold undergarments called “Wizard of Bras.” So this isn’t too far off the reservation.

What are your thoughts? If these lingerie sets were sold at the parks, would you buy them?