Once Upon a Time Preview: Episode 3-10 – The New Neverland 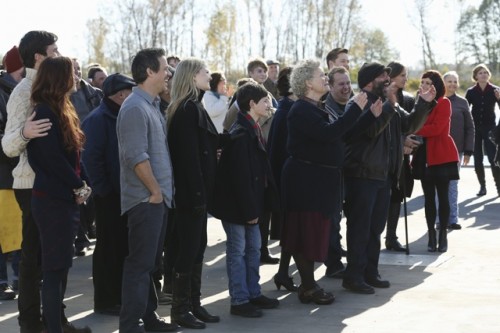 Last week’s episode ended with quite the twist. It was looking like everything was fine and we were heading back to Storybrooke to live happily ever after. Just one problem, we still have two episodes left in the Neverland arc. And then Pan and Henry’s eyes flashed and I suspected. Fortunately, they told us by the end – Pan and Henry switched bodies, so it is really Henry stuck in Pandora’s Box.

What does that mean for this week? Everyone will be returning to Storybrooke where they will be welcome back with open arms. That sounds good except for one thing – Pan is plotting to take them all down, and he’ll be using Henry’s body to do it. Now, who will be the first to realize something is off with Henry. My money is on Regina, but from the previews, it looks like Emma might learn the truth from a surprising source on her own.

Oh, and look for a certain new princess to be back as well.

As always, I’ll be recapping the episode over at Carstairs Considers on Monday night.

Tags:ABCfairy taleOnce Upon a TimeouatTelevisiontv
previousEpisode Preview: Once Upon a Time in Wonderland 1-7: Bad Blood
nextDisney VoluntEARS Deliver 36,000 Toys to Toys for Tots Charity