Once Upon a Time in Wonderland 1-6 Preview – Who’s Alice? 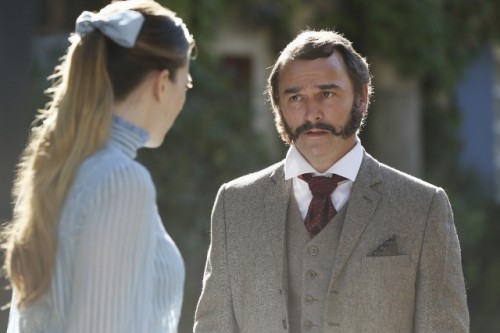 Our characters are branching out all over Wonderland, and it is going to give them lots of storytelling possibilities as they attempt to cover everyone. We’ll get our first glimpse of that this coming week. Let’s get the run down, shall we?

Alice will be trying to cross the distance to get to Cyrus. She knows where he is thanks to that magic she used at the end of last week’s episode. But her first obstacle is going to be The Black Forest.

Meanwhile, a newly escaped Cyrus is going to be trying to get to Alice, but he’ll have to dodge the Red Queen who will be trying to recapture him.

Knave is back to being human after having been turned into a statue. He’s going to be trying to track Alice down so he can help her reach Cyrus.

And Jafar and White Rabbit? At the end of the last episode, Rabbit had created a portal that is going to take them to the asylum where Alice was being held so Jafar can get more of a background on Alice to use against her.

Speaking of Alice’s back story, in flashbacks this week, we’ll see Alice’s life right after returning from Wonderland thinking that Cyrus had been killed.

It’s going to be a busy week, so be sure to tune in Thursday night. And if you miss anything, catch my recap Friday night at Carstairs Considers.

previousDiane Disney Miller, passes away at age 79
nextTV Preview: Castle 6-10 – The Good, the Bad, and the Baby