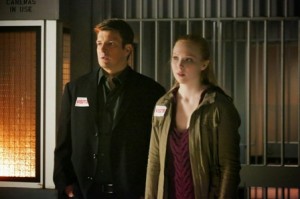 Things are tense right now between Castle and Alexis since Castle is treating Alexis’ current boyfriend, Pi, like a complete jerk. I won’t restart that particular fight here, but let’s just say I can see both sides in this ongoing debate.

That’s why I think this week’s episode will be especially interesting. It’s a familiar enough premise – trying to prove a death row inmates innocence with only 72 hours before his execution.

However, somehow Alexis has gotten involved with Project Innocence, and she’s the one who brings this case to Castle’s attention. Alexis and Castle will be taking the lead on this case with the assistance of Beckett, and I’m sure the rest of the 12th.

Will working this case be a break through in their relationship? While I don’t hate Pi, I do hope so. I’ve always enjoyed the Castle/Alexis relationship on this show. This also looks to be the first Pi free episode of season six, something we can all rejoice about.

See you at Carstairs Considers to discuss the episode after it airs.