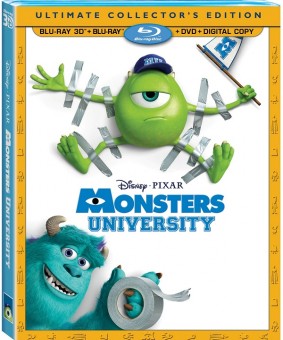 The general consensus around Monsters University

was that it was a solid effort from Pixar, which still places it above the vast majority of animated features. I certainly enjoyed it in the theater, and again when watching the DVD at home for this review. Yes, it’s very derivative for a Pixar film, if you’ve seen Revenge of the Nerds or any of a dozen other coming of age movies, you can mostly predict where Monsters University is going. Also, because it’s a prequel, there’s a certain element of surprise that’s missing. You know what is going to happen to the two main characters. But the fun is watching how they get there and the development of some of the supporting cast. Part of the Pixar winning formula is missing; the part where you go, I can’t wait to see what happens next, however, the strength of Pixar’s storytelling and world creation is more than enough to carry the film through.

The humor, world creation, and charm of Monsters Inc is all present in Monsters University. Adults may find the movie drags in bits, but our son was entertained throughout. Adults have the advantage of having more experience with school and the pressure of a career, so they’ll get a few more of the jokes.

The general plot of the film follows Mike Wazowski and James P Sullivan, the two main monsters from Monsters Inc, before they were friends, through the college years, and how they developed their close partnership. But beyond the plot, the film is really about how one deals with failure, especially when trying one’s hardest just isn’t good enough. I honestly kept thinking about how MU was a great companion piece for The Incredibles as I rewatched it on DVD. In The Incredibles we learn that if everyone is special then no one is, in Monsters University, we learn that even those who aren’t special can still find success (although all that happens in the credits sequence) through hard work and perseverance although it may not be the success they originally envisioned. It’s very zen that way.

on Amazon today and save up to 46% depending on what combo of 3D, Blu-Ray or normal DVD you require for your set up. I like the special edition because it basically has everything. If we get a 3D TV we’ll be set, but in the meantime, I can watch it on my old TV too.