Once Upon a Time 3-4 Preview: Nasty Habits 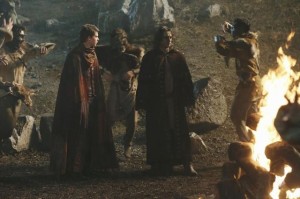 Last week, we had some interesting developments. Neal made it to Neverland where we immediately fell into the hands of the Lost Boys. David continued to try to hide his poison, although Hook knows. And most importantly, Tinker Bell and Regina made enough of a truce and Tink is going to give our heroes one shot to get into Pan’s camp to rescue Henry.

So this week? Neal is going to have to face off with his former Lost Boys. But what can he do as a prisoner? Gold is going to face Pan, but does he have a game plan or is a suicide mission? And David is going to show Mary Margaret his wound, meaning that secret is going to come out. Henry has also learned why Pan wants him – what will his reaction be?

But I think the most interesting story might be our flashback, which deals with Rumplestiltskin and a teenage Bae who is going to follow a man who sounds like the Pied Piper – a new character to their world.

I can’t wait to tune in tonight. See you afterwards (possibly Monday) over at Carstairs Considers to talk about the latest plot twists.