Once Upon a Time in Wonderland Episode 1-2 Preview: Trust Me 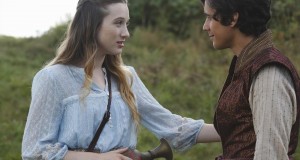 I must admit, I was not as blown away by the pilot for Once Upon a Time in Wonderland as I expected to be. My expectations were probably too high since I love the mother series so much. The potential timeline issues with the original series also bothered me, but they could potentially explain those away still. Another issue was how much of the show, especially the first half, I’d seen in previews.

I learned a long time ago not to judge a series by its pilot. Some series have tanked in their second week while some favorites of mine didn’t especially impress me right out of the gate but grew. So I will be back for several weeks to give it a chance.

This week, we will see more of Alice and Cyrus’ love story unfold in flashbacks as well as what brought a genie to Wonderland in the first place. I’m happy about that since it is the story that is driving the entire series, so we need to really be invested in it.

Meanwhile, in the current storyline, Alice will be trying to figure out who is friend and who is foe. And since we learned that the White Rabbit isn’t to be trusted, that’s a good thing. Meanwhile Red Queen and Jafar will have further skirmishes. I’m really curious to find out what they each want out of Alice, her wishes, and Cyrus. My guess is they’ll drag that out for a few weeks yet.

The ratings weren’t good last Thursday, so it looks like ABC still hasn’t overcome the curse of the Thursday at 8pm slot, but that time does have some very stiff competition. Frankly, Thursday night is just so crowded for me right now, but that’s another story. I’ll be as curious to see what the ratings are like this week as I will be to see how they advance the story.

If you missed the pilot, you can watch it online now or just catch up with my recap. If you saw it, I’d love to hear what you thought on the show in the comments!