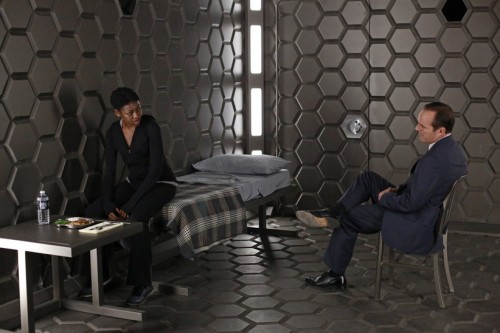 Previously on Marvel’s Agents of S.H.I.E.L.D,

Skye had her first training session with Ward (which came in handy later in the episode) as they continue to bond. I’m sure this will turn romantic eventually (they always do), but I’m enjoying the brother-sister bond that seems to be growing right now.

Last weeks episode sent the team to Peru in search of a kidnapped scientist, Franklin Hall. Dr. Hall, in fact, orchestrated the kidnapping himself in order to finish the work he started on graviton. A gravity shifting showdown occurs between Coulson and Hall that ends with a shot from Coulson that causes Dr. Hall to fall into his experiment.

I was wrong about not seeing the creation of the super-villian, Graviton, so soon. I will still be interested in seeing how this plays out though, especially since Hall will have a pretty legitimate grudge against Coulson and his team.

I love that, even though this episode was primarily about Skye, we got to see both Ward and May have moments of clarity as well. In fact, three episodes in and we have gotten some backstory and character growth from everyone except Fitz-Simmons, which I’m fine with.

Each episode may have an exciting plot, but the overall show is slower paced, focusing more on the characters than an epic story arch.

Looking on to this weeks episode, it looks like we’ll get some more of Coulson’s story and possibly some of May’s as well.

The official synopsis is:

Agent Coulson and the S.H.I.E.L.D. team try to track down a mysterious woman who has single-handedly committed numerous high-stakes heists. But when the woman’s identity is revealed, a troubling secret stands to ruin Coulson.

The synopsis is a bit more cryptic than the video teasers have been. We know the mysterious woman is a S.H.I.E.L.D. agent gone rogue – specifically one trained by Coulson. We also know that the rogue and May do not get along.

Those that were in New York for ComiCon last week were lucky enough to see this episode already. The rest of us have to wait until Tuesday evening.

What have been your thoughts of the show now that they’ve got a few episodes under their belt?