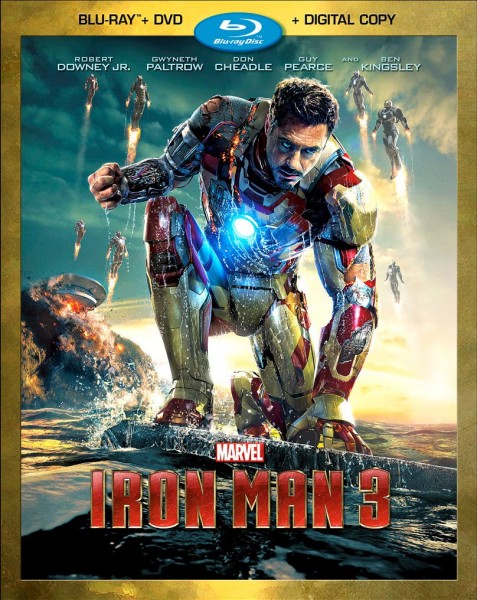 Iron Man 3, despite having a plot twist that kills the fan boy inside of me every time I see it, is currently my favorite movie this year. It is very different in tone than the first two movies, but I think that’s good. The Marvel Cinematic Universe changed after the battle of New York and this movie reflects that.

Despite said plot twist, I was really looking forward to getting the movie on blu-ray because I am a special features junkie. I love behind the scene featurettes, commentaries, gag reels and any other bonus content that want to share.

Iron Man 3 has a fair selection of features on it.

Marvel One-Shot: Agent Carter takes place a year after the events in Captain America and reunites us with his old flame who has been reassigned to desk duty. The short is a lot of fun, just like the others have been and I would be interested to see what the rumored possible Agent Carter T.V. show would look like.

The featurettes include behind scenes looks at both this movie and Thor: The Dark World. I was really impressed with how much of the effect in the movie, especially the explosion at his mansion and the on Air Force One were practical effects and not computer effects.

The deleted/extended scenes were good as was the gag reel (though not as fun as the one on The Avengers). There is also a commentary that I haven’t been able to listen to yet.

Overall, the special features are well worth the price of the blu-ray, but what was actually the most fun was syncing up the JARVIS app to the disc.

JARVIS works independently of the movie as an alarm, clock, checks local weather, connects to your calendar to remind you of events and even connects to Facebook.

But connecting it to the movie allows you to control the movie from your device. You can tell JARVIS to find a specific bonus feature, or go to a scene in the movie. He can even put the subtitles on.

Can you do all of this with your normal blu-ray remote? Of course. Is it way more fun to tell JARVIS to do it for you? Absolutely!

What kind of features would you like to have seen on the Iron Man 3 blu-ray?