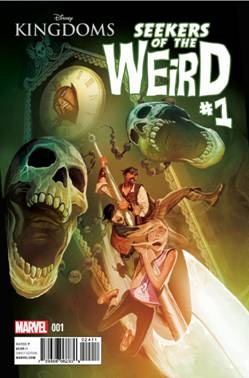 Just in time for Halloween, Disney’s Imagineering group has teamed up with Marvel to tease their newest project: a new comic series. The line is called “Disney Kingdoms: Seekers of the Weird,” and will be based on the various Disney theme parks and attractions. The series’ first of five issues, “Seekers of the Weird #1” won’t be released until this January, but Disney and Marvel have been teasing us about it since Comic Con and the D23 Expo.

“Seekers of the Weird” is based on the Museum of the Weird, which was created for Disneyland by Imagineer Rolly Crump in 1965, but was never opened because Walt Disney passed away shortly afterwards. The comic series is said to be based closely on the concept of the museum, using many of the creepy aspects of Crump’s original design such as the Grandfather Coffin Clock, the Mistress of Evil, man-eating plants, mushroom people, and an aquarium full of fish ghosts.

The story will revolve around two teens—brother and sister Maxwell and Melody—and their Uncle Roland who maneuver their way through the weird museum to rescue their kidnapped parents, all while trying to save the world from an evil, secret society.

I’m excited about this new and spooky comic. It seems like the best of both worlds, combining the adventurous, yet spooky side of Disney with the traditional, old-school comic books we love about Marvel. Will you be checking the new comic out when it’s released in January?