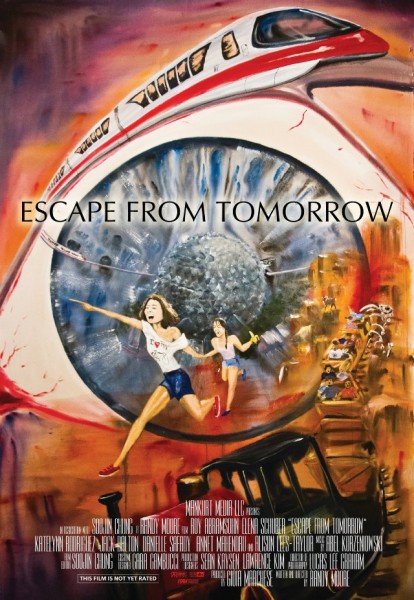 The trailer for the controversial feature film shot surreptitiously at Walt Disney World is now online. Randy Moore’s Escape from Tomorrow starts out innocuously, as a family embarks on a trip to Disney World. Once there, however, the father learns that he’s lost his job. He decides not to tell his wife and kids just yet, preferring to just enjoy the vacation while it lasts. However, as the day goes on, he descends into a nightmarish spiral of paranoia and obsession.

After its debut at the Sundance festival in January the LA Times has this to say about how the film was shot in the parks:

To make the movie, Moore wouldn’t print out script pages or shot sequences for the 25 days he was filming on Disney turf, instead keeping all the info on iPhones. This way, when actors and crew were looking down between takes, passersby just thought they were glancing at their messages.

Though Moore’s actors entered the parks day after day wearing the same clothes, and though Moore was filming with abandon, the production was never shut down by anyone at the parks–in part, the director suspects, because taking out a camera and holding it in front of people at Disneyland is about a natural an act as you can imagine.

Still, Moore worked under some serious constraints, often having to stand with his assistant director across the park and communicating by phone as actors moved in front of his cinematographer, so that it didn’t look like a crew was forming.

Escape From Tomorrow enters theaters and VOD on October 11.