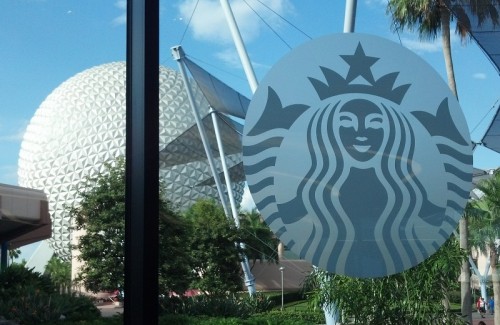 I snuck into EPCOT today after a little bird told me that the new Starbucks was opening a few days ahead of schedule. Turns out it was just a preview, but karma was on my side and I was allowed in with a group of guests to help the team work out any final kinks before officially opening tomorrow, September 4th.

The new location keeps the Fountain View name, but ditches the ice cream for other, more caffeinated treats. The layout will look very familiar to those who have visited the Magic Kingdom Starbucks. Only instead of turn of the century look and feel, there’s a vaguely futuristic, decidedly fluid watery environment. It’s appropriate given the Fountain View location.

It is a slightly smaller space than the MK location. Similarly there are no tables or chairs, or even benches, inside. There is a small space on an exterior porch for some tables, but you’re exposed to the elements there. So you take your chances if the winds blow the fountain mist your way.

Another change is that there is now only one entrance via the front doors that face the fountain. I’m not sure this is a good move, as it means there’s no way to get coffee without getting wet when it’s raining and no where to hangout inside when it does.

I love me some Starbucks, of course your mileage may vary depending on your addition level. Having it at EPCOT is going to make those chilly mornings easier. It’s nice that the prices aren’t that much above your typical Starbucks location either. 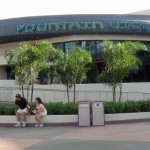 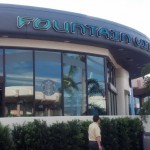 Just subtle evidence of Starbuck from this angle. 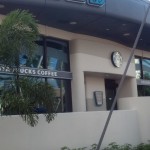 However, it’s more obvious from the front. 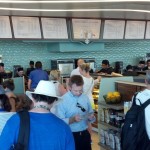 The interior has this beautiful light blue watery color tile. But less floor space than the Magic Kingdom location 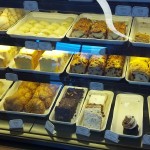 All the usual baked treats are available, plus a few with Disney touches 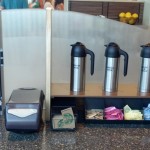 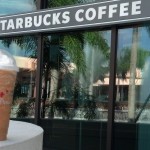 My artsy-fartsy shot. Get it. Fountains in the reflection of Fountain View Cafe.

Are you looking forward to having a Starbucks in each of the four parks and Downtown Disney? Any ideas where they should put it at Disney’s Animal Kingdom?