The Chili in a Cone Sandwich is a well-themed treat that was first available at Disney California Adventures in the new Cars Land section. It made its first east coast appearance in Downtown Disney with both Chili and Meatball Marinara options. Now the easy to hold food treat is available in Disney’s Hollywood Studios in three new varieties, including the first two cold salad options.

We taste tested two of the selections – The Cajun Shrimp and the Chicken, Bacon & Avocado Salad. Both were made with fresh ingredients and served in large enough portions to be a meal. The Cajun spices weren’t overly hot, but not as mild as theme park food usually is either. The chicken salad was also yummy with a good mix of avocado and bacon. How can you go wrong with bacon? We used a fork to eat both, but it wasn’t strictly required for the Chicken Salad. And then when the salad was gone, you still had the bread cone to eat, which had now soaked up some of the flavor from the salad. 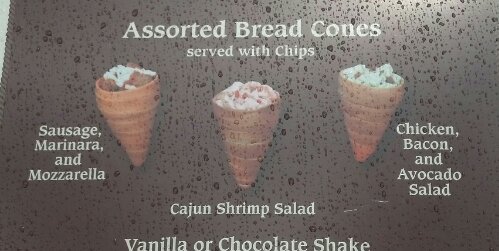 Having cool salad is a nice option for the Central Florida heat and humidity. You can find both cooler salad options and a Sausage, Marinara and Mozzeralla hot cone sandwich at Min & Bill’s Dockside Diner in Disney’s Hollywood Studios. The shrimp salad costs $9.99 and the other two $8.99. All three cone sandwiches come with a small bag of chips.

I love to see Disney adding new food choices in the parks. These are definitely winners which we’ll be back to try again.