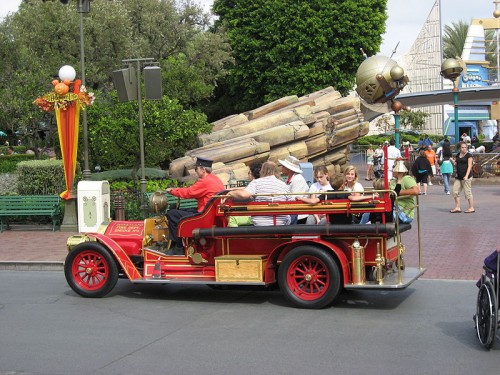 In 1958 legendary Imagineer Bob Gurr pointed out to Walt Disney that his Main Street USA had a Fire Station but didn’t have a fire engine. There’s a great quote from Gurr over on the Disneyland Compendium on how he got permission to build it.

…one day in the spring of 1958, Walt comes into my office as he usually does and he just sort of sits there and I looked at him and I said, “Walt, you know there’s one thing we haven’t got in Disneyland! We don’t have a fire engine on Main Street!” And he said, “Yeah, we don’t have a fire engine.” Privately, I wanted a fire engine and I knew that everybody else told me that the only thing that ever goes into Disneyland…those ideas come from Walt, they don’t come from anybody else. But I wanted a fire engine. Anyway, he goes away and a little while later Accounting phones up and says, “The charge number for the Fire Engine is…” so I knew that Walt had gone to Accounting and had decided we’re going to have a fire engine. That’s the only attraction in Disneyland that’s my attraction.

Of course, Gurr also had the honor of driving the Fire Engine down the newly opened I-5 Freeway to Disneyland.

Here’s a short video from Disneyland celebrating the fire engine.

Here’s to 55 more years of the Fire Engine on Main Street!