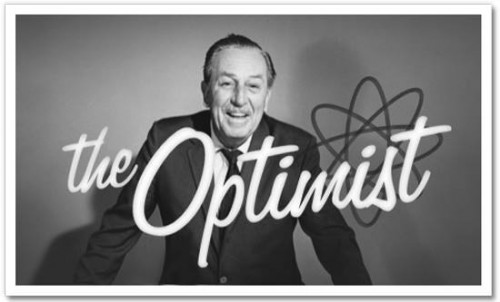 I like to see Disney trying new things online. For the debut of New Fantasyland, for instance, they made up a story about a dragon spotted in the sky and gave out various clues via a blog until the ‘real’ dragon was spotted at the press event. As that dragon hasn’t been seen again. It looks like a similar, but more involved alternate reality game has been launched for the six weeks leading up to the D23 Expo in Anaheim this year. The game is called “The Optimist,” and it’s presented through a partnership between Walt Disney Imagineering Research & Development and The Walt Disney Studios.

“In this alternate reality experience, one of our characters has discovered some previously unknown facts that could change what we think we know about Walt Disney, Imagineering and Disneyland park,” said Scott Trowbridge, head of Walt Disney Imagineering Research & Development. “Players can participate at different levels of engagement over the six-week story — from leveraging social media and mobile devices to visiting unique physical sites from the story in and around Los Angeles.”

“At Imagineering, we are constantly exploring and developing new ways to engage our guests in compelling, interactive experiences,” Scott said. “With ‘The Optimist,’ we are excited to connect people with each other around the world to uncover a story that seems so unbelievable — and at the same time, so encouraging — that it could only come from Disney.”

Obviously, this is a game. So while it may involve real world spaces and historic and current people, it’s also fictional and not representing actual events. Plus it sounds like you’ll have to either visit or have some familiarity with Los Angeles landmarks to play. The game wraps up at the D23 Expo, so you’ll probably need a ticket to that too.

Visit optimist.disney.com to learn more about the experience and get started.