Construction for Disneyland’s original Tomorrowland didn’t even start until December 1955, that left them just 6 months to pull it all together. If you visited the early incarnation of Disneyland’s Tomorrowland you would have encountered a number of exhibits that were essentially corporate brochures realized in 3-D. Walt really didn’t get a chance to articulate the aesthetic he wanted until he set plans for the 1967 Tomorrowland version in motion. Alas, he didn’t live to see how it all came together (and it wasn’t really complete until Space Mountain opened at the Magic Kingdom anyway).

One of the iconic elements of the 50s and 60s Tomorrowland was the “Spaceman” character. Here from the Disneyland archives is a rare photo from 1960 where “Spacewoman” joins in the fun. 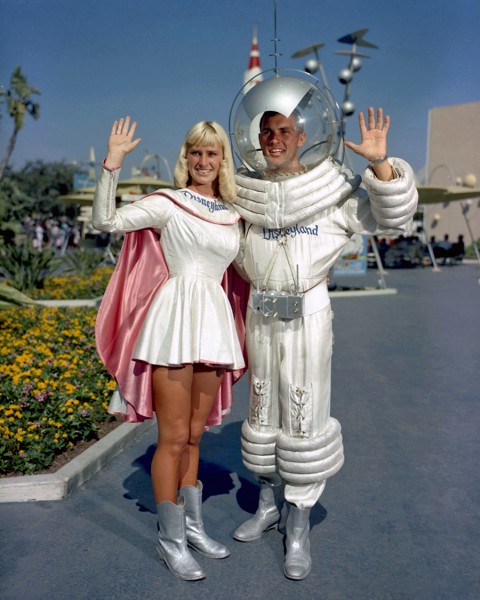 Love it. Check out that Space Age Googie Architecture in the back too.

These days, Tomorrowland is a sore-spot for the magic kingdom parks. America no longer shares the unbridled enthusiasm for the future that made the Spaceman character so cool. But we do need a vision for the future and I hope Disney’s parks can play a part in that again. What would you like to see if Tomorrowland was ever updated again?

previousABC Family has a hot summer line-up…but what about Bunheads?!
nextTop Ten Ways to Get Your Disney Sugar Rush.