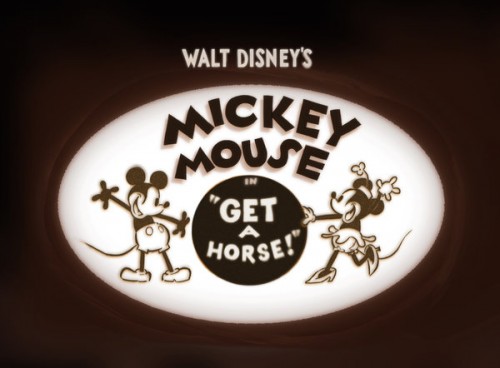 There’s a Mickey Mouse cartoon scheduled for a world debut at the Annecy Animation Festival on June 11. Disney animation is playing coy saying only that the never-before-seen Walt Disney Animation Studios short will feature Walt Disney’s voice as Mickey Mouse. It is said to be in black and white and hand draw, just like classic Mickey shorts.

In “Get A Horse!” Mickey & Minnie Mouse and their pals Horace Horsecollar and Clarabelle Cow enjoy a pastoral musical wagon ride until Peg-Leg Pete shows up and tries to run them off the road!

The provenance of the film is unclear at this point. It seems likely the animation is newly crafted, but designed to look like a classic animated film in some way. It might have started an abandoned film for which Disney previously recorded lines, or they might be coupling together some lines from early Mickey Mouse films. Either way, this must have been a labor of love for Disney Animators.

Disney has committed to a new series of animated shorts featuring Mickey and his Friends. So it sounds like there will be even more after “Get A Horse!” is released.

Previously: Walt Disney Animation Studios Lays Off Most of its Hand Drawn Staff.

previousCastle 5-21: The Squab and the Quail
nextNew Disney Video From Heather Traska on Thursday