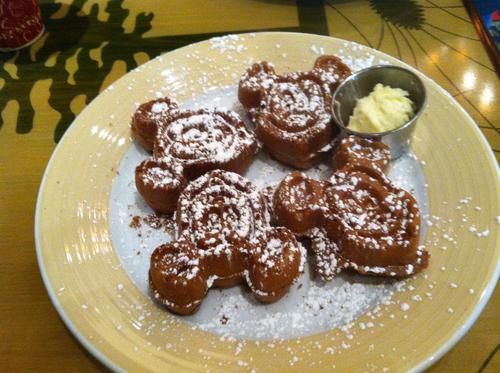 Last week I talked about the great character interaction you’ll find at Disneyland Resort, but by far the easiest way to meet characters is by going to a character meal where you’ll bypass the lines and have a much more relaxed experience. For research purposes (okay, I had a 5-year old with me), I tried out three of the five breakfasts available on property and I’m happy to report there wasn’t a bad meal in the bunch. 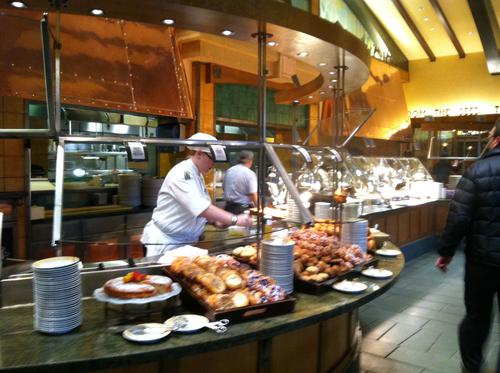 Storyteller’s Breakfast at the Grand Californian Hotel and Spa:

We did this first and I’m glad we didn’t let it scare us off from character dining at Disneyland Resort because it was, especially when compared to character meals at Disney World, pretty quiet and low-key. This is actually a good thing because your kids will probably find it easier to focus on their food without a ton of noise and activity. We met Rafiki, Terk, Meeko, Koda, Pluto and Dale, who came back to the table more than once. Since we went in early February, one of the slowest weeks of the year, the dining room was almost empty and the character interaction was top notch, even if my son didn’t recognize all of the characters. 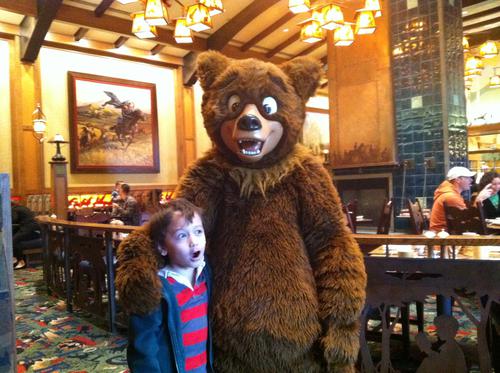 You can either order off the a la carte menu or from the buffet, which is $25.99 for adults and $11.99 for children 3 to 9. This might seem high, but given the price of food everywhere on Disneyland Resort property, it’s actually a good bargain for a “stick to your ribs” kind of meal. The food here was extremely fresh and well-prepared, with a huge variety of fresh fruit, eggs prepared to order, Mickey waffles, pastries, and other breakfast foods. No one, even picky eaters, will leave here hungry.

As a Disney World guest, I’m not used to going to a character meal doesn’t seem at least a tiny bit frenetic and it was a little bit odd at first. No kids running around, no racing back and forth to the buffet table. This was a nice change of pace. I think even if you’re not visiting with small children, the meal here is worth the price, particularly given the variety.

Goofy’s Kitchen in the Disneyland Hotel:

We had so much luck with the Storyteller’s Breakfast that we decided to try Goofy’s Kitchen the next morning. If you’re a Disney World guest, you probably just said “Say what? Did you make a dining reservation 180-days out? That’s the great thing about visiting Disneyland, particularly during slower times of the year. We literally made our reservation that morning.

The Disneyland Hotel is made up of several buildings clustered around the pool and Trader Sam’s, a famous on-property tiki bar. It’s an easy fifteen minute walk from the Grand Californian or either park, and right across the parking lot from Paradise Pier. Even during slower times, expect a long line to check in. You’ll pay ahead of time, and then go get your picture taken with the star of the show himself, Goofy. Breakfast is $27.99 for adults and $14.99 for children ages 3 to 9. 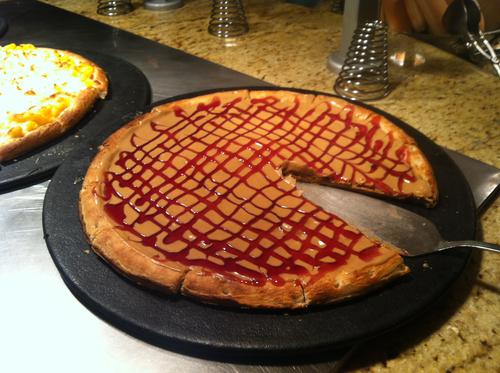 How can I put this delicately? The food here was by far the most abundant and yet . . . the most weird, I have ever experienced. It was good, don’t get me wrong. But it was like visiting your grandmother when she hasn’t seen you in a while and she decides to basically make everything you ever enjoyed in your entire life: Pizza, omelets, French toast, hot dogs, tacos, fried chicken, pancakes, cookies, pudding, cake. Lots of food, and all of it very, very good. I think if I had teenage boys I’d bring them here closer to lunch and just let them graze for a couple of hours. If you have a big appetite, you’ll be happy here. 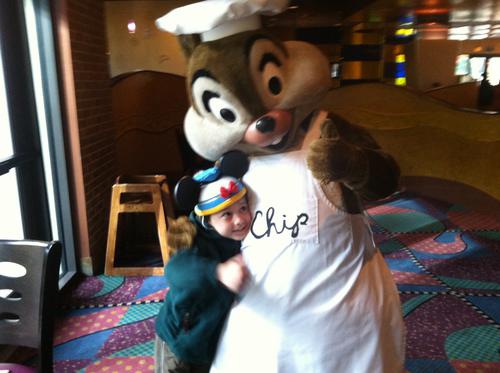 As for the character interaction, we met Pluto, Minnie, Rafiki, Mulan, and a few others. It was as relaxed as Storyteller’s Café and the characters were super engaging, even down to the lovely Mulan, who decided to tease my son about why he didn’t like princesses.

Overall, Goofy’s Kitchen is a fun experience and I’d even go as far as to say it’s a must-do as far as character meals at Disneyland are concerned. The food isn’t nearly as healthy as you’ll find at Storyteller’s Café, but it’s plentiful and you’re on vacation, so go ahead and indulge. Even though we got reservations easily, in the future I’ll make my reservation at least a few weeks in advance at this popular location.

Plaza Inn Breakfast with Minnie and Friends in the Disneyland Park:

This is the weakest link in all the character breakfasts, an issue which is probably exacerbated by the fact that it’s in a park is therefore busier and more rushed. You’ll pay $23.99 for adults and $11.99 for children ages 3 to 9. The food here is pretty basic: Omelets, pancakes, breakfast meats, pastries, and a limited variety of fruit. Southerners, be prepared: The Plaza Inn also serves what is possibly the worst sausage and biscuits ever to grace a table. The here food isn’t terrible, it’s just that compared to the other character meals we had, it’s rather bland and unimaginative. 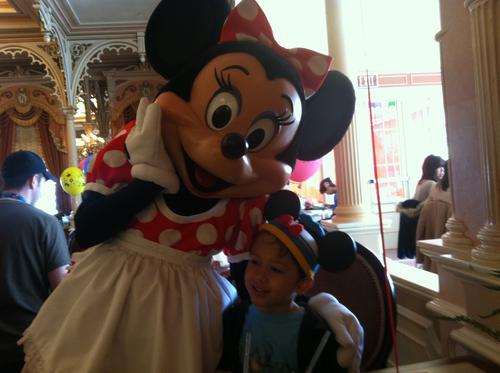 Fortunately, there’s an abundance of characters to make up for the mediocre food: Minnie, Pluto, Chip, Dale, Pooh, Eeyore, Tigger, Captain Hook, the Fairy godmother, and others were all present during our visit. Unfortunately, they didn’t seem to be making the rounds in the usual fashion and all but three characters skipped our table. As at any character buffet, if this happens to you, speak up and a cast member will make sure you get to meet the character you missed. At this point, we were fairly sated with regard to characters and didn’t mind, otherwise we would have asked.

Disneyland character meals are a real treat for anyone, especially character hunters and kids. Have you ever dined with characters while at Disneyland? Do you think it compared favorably—or better—with Disney World? I’d love to hear about it in the comments.