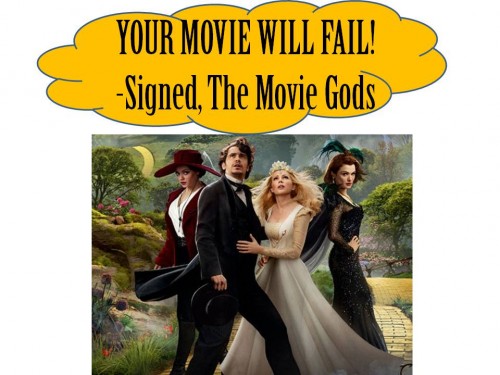 John Carter is now considered one of the biggest movie blunders of all-time. You would think that Disney would start to stray away from big budget flicks for a little while, then work its way back up. Unfortunately…they went the opposite direction. Oz, coming out next month, has a $200 million budget. Let me repeat that, a $200 million budget. That is humongous. That means that Disney needs Alice In Wonderland/Iron Man/Batman numbers to make money. Now that is a risk.

You might be saying to yourself “Hey, that is okay. One big film a year isn’t bad!” Well, you are sorely mistaken. This comes out in March, then May brings us Iron Man 3, and July is the opening for the problem-ridden Lone Ranger. The latter has a budget of somewhere around $300 million. Those numbers are crazy. If the Lone Ranger isn’t a hit, someone will be fired at Disney, I guarantee you.

Mars Needs Moms had this same problem a few years ago. A $150+ million budget paired with a resounding thud at the box office. Though their track record isn’t good, Iger is (allegedly) hammering away trying to get big budget, franchise flicks made. John Carter was suppose to be a huge franchise for the company, along with Tron: Legacy, but both under performed (the latter is apparently still getting a 3rd film).

Looking ahead, we have Maleficent next year, Star Wars 7, Pirates 5, and an apparent 20K Leagues Under The Sea remake with 9 figure budgets. It is constantly mind boggling to me  why they keep churning these out. Back when I was younger, while they had an occasional money-grabber, they would pair them with fun and cheap fare, like the Princess Diaries franchise and Confessions of a Teenage Drama Queen, which is now almost extinct. All they want are huge hits with franchise possibilities, which I don’t entirely agree with.

What do you think? Would you rather see a mix of budgeted films or all blockbusters? Also, are you excited for Oz? Let me know in the comments below! Until next time…Have a Magical Day!