The next animated short from Pixar just debuted at the Berlin International Film Festival. Guests there were each given a wonderfully minimalist poster for the short that echoes some of Hollywood’s classiest films. 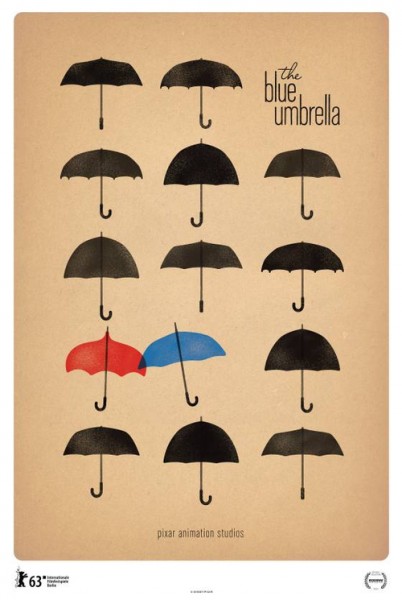 If you want a chance to see “The Blue Umbrella” stateside, your next chance is SXSW. The rest of us will have to wait until it enters general release in front of “Monsters University”.

Synopsis: It is just another evening commute until the rain starts to fall, and the city comes alive to the sound of dripping rain pipes, whistling awnings and gurgling gutters. And in the midst, two umbrellas—one blue, one not—fall eternally in love. From Pixar Animation Studios, director Saschka Unseld and producer Marc Greenberg, “The Blue Umbrella” opens in theaters on June 21, 2013, in front of “Monsters University.”

Previously: An early clip from The Blue Umbrella.