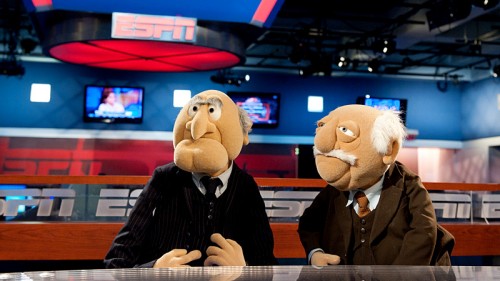 Statler and Waldorf would approve of this synergy

There’s something to be said for synergy. If you add up it’s own library, Pixar, Marvel, Lucasfilm and other purchases Disney now owns the rights to well over 25,000 characters. Disney acquired The Muppets early in this string of acquisitions. As such they’ve had the longest to get to know the characters and where crossover synergy can be effective. They haven’t attempted to fit a Muppet into every TV show or movie, they haven’t recast a character on Castle with a Muppet (although a Nathan Fillion Muppet would be cool). Instead they’ve found the occasional opportunity where the unique blend of Jim Henson humor pairs well with another property.

The latest example of a sensible pairing is in this ESPN commercial. ESPN is already known for its humorous commercials and this one just works.

I think the development of The Muppets as an element of Disney’s stable is a good indicator for what to expect with Lucasfilm and Marvel. Yoda won’t be hosting the Oscars and Iron Man won’t suddenly show up in Episode VII. Instead it will be done in good taste and with careful timing. At least I hope so.