This month’s TDB Master Tweeter is… 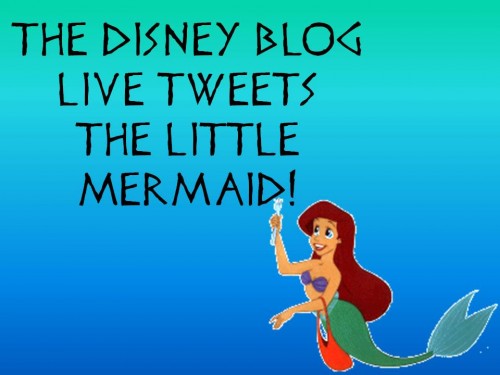 First off, I would like to thank everyone who joined us. Whether you tweeted or lurked, I had a great time and cannot wait to make this a monthly thing. There were a LOT of thought provoking and hilarious tweets and it took me a while to decide which one to pick as my favorite…but I came to a conclusion.

This person had two of my Top 3 tweets of the night… which was enough to push them over the edge. The winner is…

Moment of silence to remember Ariel’s soft-serve hair at the DCA ride. #LittleMermaidLive

@hayleythehatter on twitter! A huge congrats for being the first TDB Master Tweeter! You prize is simple (relatively). You will get to choose the two nominees for next months Live Tweet! You can go romantic since it’s February, you can pick two of your favorites, or you can just pick two Disney films you have never seen! It is up to you! I will be contacting you through your twitter, so be on the look-out for that!

I have also included a few Honorable Mentions since there was a lot of tweets that really made me laugh.

And then Ariel drowned before ever getting to the surface. The end #littlemermaidlive

#LittleMermaidLive When Sea Creatures attack on the next Montel

Thanks again for joining me…and Have a Magical Day!