This year’s Disney Marathon weekend threatened to be known for its shoes. The Mickey & Minnie New Balance running shoes were a hit online and at the event. But in the end, it was about the runners. Everyone of them pushing their own limits and some of them setting world records. Along the way there were celebrities, new friends, and a lot of fun.

Perhaps it was fitting that at the 20thannual Walt Disney World Marathon the greatest champion in the event’s history – Brazil’s Adriano Bastos – reclaimed his place in the victory circle Sunday. 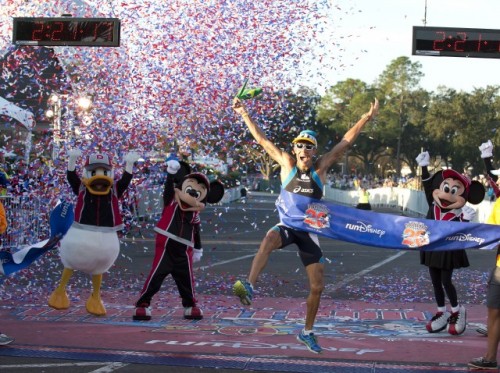 Bastos, who had won seven previous Disney Marathons, including six straight before losing the last two to countryman Fredison Costa, this time held off Costa down the stretch for his eighth victory at the place Where Dreams Come True.

Bastos, 34, lost to Costa, 35, at the 2011 Disney Marathon after getting ill the night before the race, then was edged by him again last year, finishing just 14 seconds behind. Bastos, who trains with Costa, said the two-year drought was extra motivation coming into this year’s race, especially given that it was the 20th annual event.

“It was extra motivation, for sure,” Bastos, wearing a Donald Duck hat, said through an interpreter.

In a wire-to-wire duel between Bastos and Costa that has become commonplace at the Disney Marathon, Bastos flipped the script on Costa, winning the late-race sprint this time in the final half mile. Bastos, whose goal is to win 10 Disney Marathons, broke the tape at 2:21:16, just 16 seconds ahead of Costa (2:21:32). 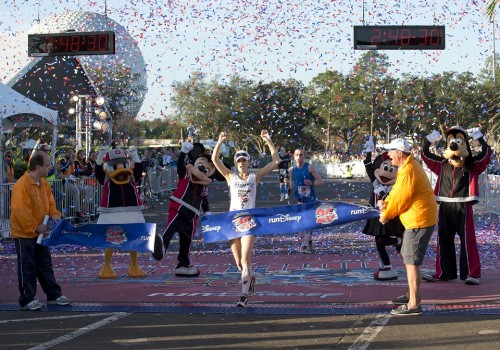 Renee High continued the trend of repeat champions by finishing as the top female runner for the second straight year. High of Virginia Beach, Va., ran the 26.2-mile race through all four Disney theme parks, the Disney Speedway and Disney’s sports complex, in 2:48:30, three seconds quicker than a year ago.

In the men’s Masters division, Ronnie Holassie of Miramar, Fla., came in first with a time of 2:25:26. Wendy Nixon of Windermere, Fla., was the first female across the finish line at 3:22:14. In all, more than 25,000 runners, including former pop star Joey Fatone and several running legends competed in the Disney Marathon presented by Cigna on Sunday. Roughly 10,000 of those runners also ran the Disney Half Marathon the day before as part of Goofy’s Race and a Half Challenge – running the half and the full marathon on consecutive days (39.3 miles). The weekend event drew unprecedented interest this year, selling out less than five months after registration began, marking one of the fastest sellouts in the event’s history.

Runners from around the country and beyond have been undoubtedly drawn to the event because of several unique features tied to the 20th marathon, such as new course twists, the new Mickey Mouse medal and the post-race party at Downtown Disney.