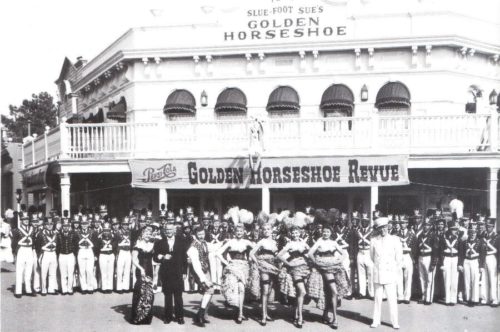 Part of the magic of the Disney Park’s Limited Time Magic promotion is finding the little stuff that you just don’t expect. For instance, I think most fans would have been thrilled just to have the tribute to the Golden Horseshoe Review show. But Disneyland is taking it a step further with some special food offerings to accompany the show.

One of those treats is a delectable bite-size version of the Monte Cristo Sandwich. Other food on the menu includes a more contemporary spin: crispy mozzarella sticks, chicken wings, chicken salad, the popular chili cheese fries and the chili in a bread bowl with shredded cheese. They’re also including a special dessert with a red velvet cake with cheesecake mousse, raspberries and a snazzy can-can girl decoration. I don’t know about you, but I’d love the recipe to recreate the mini-Montes.

“A Salute to the Golden Horseshoe Revue” takes you back to the days of musical variety shows (the kind that Walt Disney loved) and runs from January 10-14, January 17-21, January 24-28 and January 31-February 4 at Disneyland.