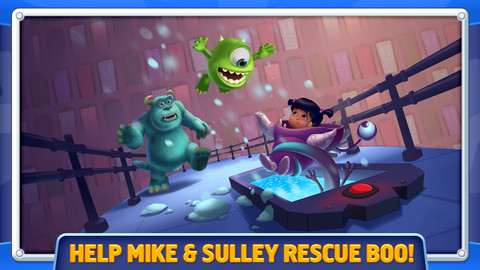 An insightful look at how Disney produces video game tie-ins to its movie properties over on Verge. Disney hopes to replicate the success of Temple Run: Brave with the new game Monsters, Inc. Run. But Disney doesn’t develop these games itself. Instead it partners with smaller developers:

“It’s fantastic that we would get that recognition,” Segal says of being noticed by Disney. “They were talking to studios and looking at studios to possibly work with, and they approached us and it was kind of like, yeah, this seems like a really good opportunity.” Get Set had released an iPhone game called Mega Run in May — think of it as Canabalt meets Super Mario Bros. — and it was a title that got Disney’s attention.

It looks like a fun game. Right now it’s only available on the iOS. Hopefully an android version will be release soon, so I can play it.

Details below the jump:

Run, jump, and power your way through this monstrously fun action game! Journey through the city of Monstropolis with famous scare teams from Monsters, Inc., and find a way to rescue Boo. Brought to you by Disney and Get Set Games, the makers of Mega Run!

★ Play as 4 Monsters, Inc. tag teams!
Choose from Mike and Sulley and your other favorite characters from the film. Use power-ups to call in your partner for help!

★ Dash through 3 worlds and 48 exciting levels!
From the Monstropolis Rooftops to the Ice Cave, experience the monsters world like never before!

★ Master levels with over 20 explosive power-ups!
Fly with jet-packs and attack with ray guns and more to get one step closer to Boo!

★ Take on familiar monsters from the movie!
Dodge and blast through menacing monsters that stand in your way!

★ Go on an endless running adventure in Endless Mode!
Collect coins and blow your way through monsters and blocks for high scores!

★ BONUS! Download Monsters, Inc. Run, and start off with FREE Bucks!
Get 50 FREE Bucks to spend on new scare teams and life savers!