Three years ago today Avatar debuted on the big screen and changed the way cinema was experienced forever. It might take 3 more years before it opens, but we did get confirmation that a project that would build Avatar’s Pandora is still on track for Disney’s Animal Kingdom.

At the ‘Around the World’ portion of the New Fantasyland media event, the following image was shared with the audience by Walt Disney Imagineering VP Bruce Vaughn: 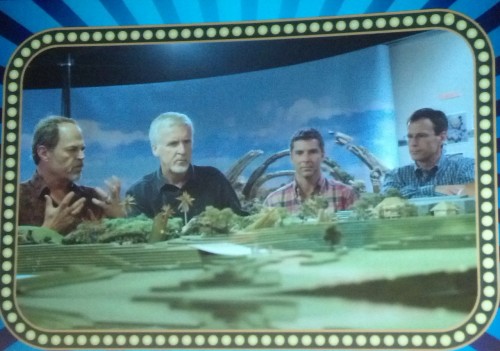 What Vaughn also said was that this was relatively early in the design process and that it has changed a couple of times since then. Still confirmation that a land based on James Cameron’s Avatar was still planned for Disney’s Animal Kingdom was the biggest news of the weekend.

There had been some discussion among Disney park fans that with the acquisition of Lucasfilm, there was no longer any need to go outside the Disney fold for a property like Avatar that has yet to prove its staying power, unlike the long term success of Star Wars. This doesn’t mean Disney won’t incorporate more Star Wars into its theme parks (or more Marvel for that matter), just that the horizon for that is further off.

Previously: leaked building blue prints indicate there will be at least two attractions in the land.