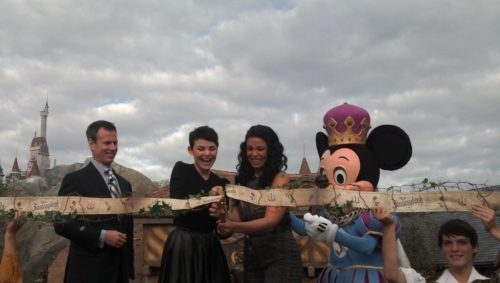 There’s even more in store as the expansion of New Fantasyland continues:

Princess Fairytale Hall (2013) will be the new home for Disney princesses to meet their loyal subjects in the Magic Kingdom. To open in the Castle Courtyard in the center of Fantasyland, the regal space will provide the perfect setting for meeting Cinderella, Aurora, Tiana and the other Disney princesses.

The Seven Dwarfs Mine Train (2014) will take Magic Kingdom guests on a rollicking, musical ride into the mine “where a million diamonds shine.” The family-style coaster will feature a first-of-its-kind ride system with a train of vehicles that swing back and forth.

It’s wonderful to have these two areas officially open and it will be even better when the Mine Train is finished and the area works together as a completed story. I am reserving my final judgement on the overall design and flow until that time. Until then, we do have some beautiful imagineering to enjoy and a return to the full complement of attractions that existed before the submarine voyage and Toontown fair went away. That will definitely help with Magic Kingdom’s ability to absorb crowds.