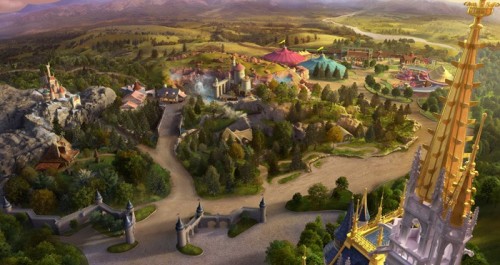 The official opening of New Fantasyland is just around the corner. As Disney is wont to do, they have arranged a press event around the opening and announced a special look at what’s next for the Walt Disney World Resort coming toward the end that event. Add to that a viral marketing campaign built around dragons coming to the resort and you have the perfect recipe for fan fervor. Heck, after riding a new attraction, show, or parade, this is what we fans love to do most – dream about the future of the parks.

What we know is that Disney has announced a partnership with James Cameron to build a land based on his Avatar movies at Disney’s Animal Kingdom. We also know that Disney CEO Bob Iger has repeatedly stated that the Disney Parks division is coming to the end of its current phase of large capital expenditures. After Shanghai, New Fantasyland, Cars Land, Avatar (and let’s not forget Next-Gen project that could total up to over $2 billion), Disney’s investors expect the park to sit back and start earning back some of the dough those investments have cost. I have to take Bob Iger at his word there.

Of course, there are other ways to improve the parks beyond capital investments. These include new parades, shows, better training of employees and improved service to customers to name a few. I suspect these will be the majority of announcements for what’s next at Walt Disney World. A “Believe in Fantasy” night show (think World of Color technology combined with fireworks above the castle) would fit that bill. However, that does not mean there isn’t room for Disney to change its mind.

Richard Bilbao, the Orlando Business Journal’s theme park writer, looks at the speculation about the viral marketing and says what nearly every Disney fan I’ve spoken to has wished for — the end of the Avatar project and a focus on properties that Disney actually owns:

I know this is far-fetched, but with the acquisition of the Star Wars brand, investing in that franchise makes more financial sense then the Avatar film, which was nowhere near as popular. So why not ride that whole fantasy and magic theme and try to create a bigger tie between the parks by saying a dragon from Fantasyland has now nested in Animal Kingdom?

So go check out the new Fantasyland website and let us know how you think the viral marketing campaign will fit into the story. Also We’d love to hear what you would like for Disney World to announce at the What’s Next presentation.