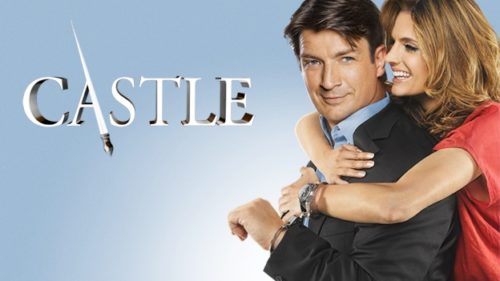 While last week was a bit of an attempt to change the usual formula for the show, last night really change things up. It reminded me in many ways of “Cuffed” from last season, but it was still a well done episode.

It all started with a meet the parents dinner, or at least dessert. Beckett’s Dad has joined Beckett, Castle, and Martha at the loft. Martha has even made her one dessert, death by chocolate. Unfortunately, Martha and Beckett’s Dad aren’t really getting along. He insults her lack of seriousness since she is an actress, and then she turns around and calls baseball boring. (It is, but we won’t go there.) Castle and Beckett are relived to be interrupted by a phone call about a body.

The body turns out to be a priest who has been shot three times in the heart. It looks like the work of a professional.

Esposito and Ryan are sent back to the precinct to meet with a nun who worked with the priest. That was a very funny scene as Ryan was so nervous before the meeting started because of his Catholic school background but Esposito was the one who was more on edge by the time the meeting was over. From the nun, they learn that the priest was best friends with an enforcer for the mob, and they had a big fight two days ago. Bingo, we’ve got the killer.

Castle and Beckett, meanwhile, are carrying on their parents’ fight. They are in the middle of bickering when they arrive at the door of someone in the Bronx who witnessed the killer leaving the site of the crime the night before. But just before the witness answers the door, goons show up and take Castle and Beckett’s phones and gun. Certain they are there to kill the witness, they manage to escape with him out the window. Only Beckett’s car has been stolen. They are now alone in a very bad neighborhood with no way to get help.

What follows is their attempts to find a phone to get help or get to a subway or do something without the goons finding them first. Meanwhile, Castle and Beckett are still bickering. When Castle tries one of his usual things, Beckett snaps at him that it won’t help. Of course, her ideas aren’t helping either. Along the way, the witness hurts his ankle, slowing them down further and getting them trapped in a basement. Beckett finds a take out menu from a 24 hour restaurant, so Castle goes there for help.

Meanwhile, back at the precinct, Gates, Esposito, and Ryan are working desperately to locate Castle and Beckett. They track down her car and arrest the people who stole it. Esposito goes to the apartment, but learns that there is no one there. About that time, Martha and Beckett’s Dad show up. They don’t give away anything to Gates about why they showed up together, but they spend the rest of the night waiting, and they start to bond a little over the shared worry for their kids.

It’s when the detectives learn that the mob enforcer (remember the chief suspect) was talking to the FBI about turning on the mob family he worked for that things take an interesting turn. For example, he was in FBI custody when the murder took place and broke out shortly afterward. Um, maybe he’s got a solid alibi.

Castle almost makes it for help when he is picked up by the goons. They are indeed working for the enforcer, but he is looking to talk to the witness, nothing more. Castle believes him, but is still worried that he and the other two will be killed in the end. He tries to keep their location a secret, but his poker skills aren’t up to the job, and one of the goons head out to get them. For a minute, I thought Castle was sending them off in the other direction, but I was wrong.

When the goon gets to the basement, Beckett takes him out and the witness picks up the gun. He points it at Beckett. That’s right – he’s not only a witness, but he’s the killer. His motive? Well, the enforcer is the real target, and he killed the priest in order to draw the enforcer out of hiding. He was waiting for him to follow up with the “witness” so he could kill him. He has Beckett call Castle and the enforcer to set up the meet. Beckett insists on talking to Castle, and while they are talking, she makes a reference to them going to a baseball game with their parents when this is all over.

Beckett and the killer show up at the meet, and the killer immediately empties his gun into the car. And then the enforcer, Castle, and his goons show up from around the corner. Castle figured out something was wrong with the discussion about baseball, so they used the empty car as a decoy. Police immediately swoop in. One of them then whistles for a cab that shows up right away. Castle and Beckett are shocked it was that easy, but they gratefully head for the precinct.

Along the way, they have managed to work out their differences. Beckett is still worried that they are from two very different backgrounds and this won’t work. But Castle is still assuring her they can make it happen. And it looks like their parents have worked things out, too, because the last scene is of the four of them talking and laughing together as the sun finally comes up after a very long night.

As I said, the similarities to “Cuffed” from last season are pretty obvious. Beckett and Castle fighting but forced to rely on each other to survive. The others trying to track them down.

Having said that, I loved it. It laughed so much during the episode, yet I actually felt real danger and suspense, something I rarely feel while watching the show. I knew nothing would happen, but I was still worried about how they’d survive.

And on a random trivia note, the nun at the beginning was played by Bonita Friedericy. She was a co-star on the TV show Chuck, which starred Adam Baldwin, who guest starred last season and co-starred with Nathan Fillion on Firefly. Okay, so I might be the only one who cares about that six degrees connection, but I thought it was cool.

Looks like our next episode is in two weeks, and it will be the first Christmas theme episode of the show. Until then, let me know what you thought of this episode.