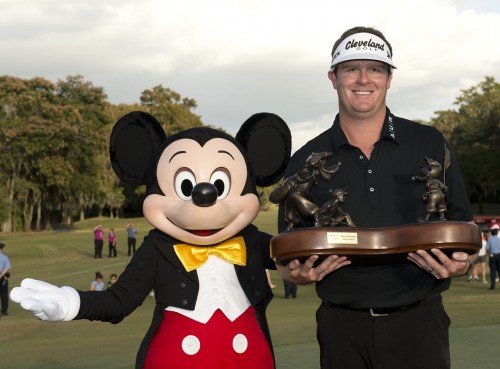 Charlie Beljan, winner of the 2012 Children’s Miracle Network Hospitals Classic at Walt Disney World Resort, posed yesterday with Mickey Mouse following his win at Disney’s Magnolia Golf Course. Beljan’s win was a bit of a fairy tale story. He battled through chest pains during the tournament and then shot a -16 for the tournament to win the 42st annual PGA tour event at Walt Disney World. The rookie shot eight birdies Sunday to keep his three shot lead and capture the tournament title. The season finale win also secured Beljan a PGA tour card and moves him up to No. 63 on the Money List. Check out that nice trophy too!

This is the last year Children’s Miracle Network will be the major sponsor for the yearly tournament at Disney World. The event suffers from the being the final stop on the PGA Tour. Most of the big names skip the event, but it does have drama as many pros fight to get a guaranteed spot on next years tour.

I would like to see ESPN become the sponsor of the event. It’s a hugely profitable part of the Disney empire and Forbes says it’s the most valuable media property in the world. Tie the event into a new mini “ESPN the Weekend” with a weekly long celebration of the amateur athlete where a few ESPN personalities are on hand to hold public sessions. Building the personal stories of golf athletes can only help ESPN as it attempts its continued coverage of the sport too.

If it’s too odd to have ESPN as the sponsor, then Walt Disney World or DVC should step up to the plate.

previousHighlights from the 2012 Festival of the Masters
nextDisneyland goes Retro for Saving Mr. Banks