Highlights from the 2012 Festival of the Masters 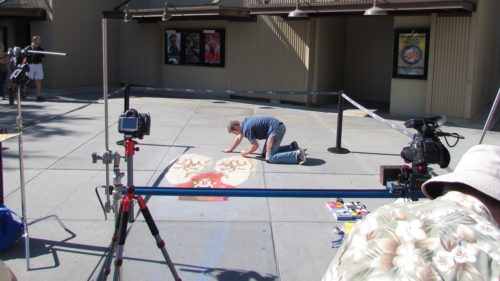 The Festival of the Masters event at Downtown Disney is often thought of the cream of the crop for artists on the art show circuit. You have to have won a prize at one of the other shows in order to secure an invitation for Disney’s show. That’s part of what makes it a must see on my calendar.

Here are a few highlights from this year’s show. It’s light on the art work since most artists request that you don’t photograph their art. You’ll just have to visit Festival of the Masters next year or a show near you to see more.

Sadly, I missed last year, but I felt that this year’s show had slightly fewer artist booths. It did have plenty of sponsored family friendly events, which is a great part of the festival. There was also some live music. However, the big sculptures were missing this year and I think the show could really benefit from more music and food.

I did like that Disney brought in a 3D Chalk Arist. They use perspective to make it look like their drawings have added depth, it’s hard to capture on film, but very effective in person.